10 curious wedding traditions around the world

Posted at 13:14h in Culture by Nathan Peters 0 Comments
0 Likes

Discover adorable, curious, and fun wedding traditions in different countries. Perhaps among these 10 options, you will find inspiration for a symbolic celebration or a very original ceremony.

Are you an adventurous couple? Do you want an unusual wedding? Do you like to know about other cultures? If they answered “yes” to the questions, then they are interested in knowing wedding traditions are carried out around the world, because in each country there is a different way of celebrating love. 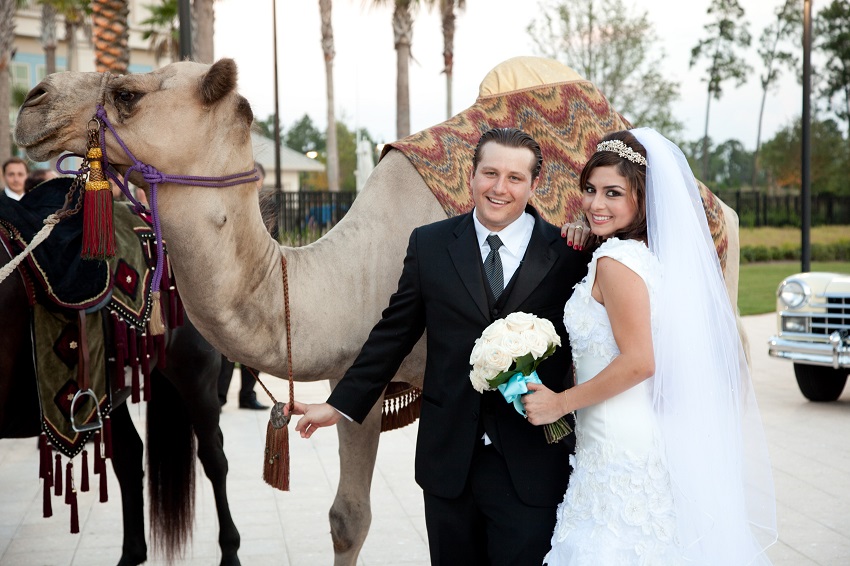 For many, Egypt is the country of origin of one of the most beloved wedding traditions by couples around the world: carrying a bridal bouquet. Originally, the bouquet served to ward off evil spirits, but this is not the only tradition that nurtures the cultural heritage of this country, the bride’s friends must pinch it before the wedding! In this way, they wish you good luck and have a fun time.

India: the bride gets a tattoo

Not permanently, of course! A classic tradition in India and very popular in some African countries is the henna night or ceremony: “Mehndi”. In this ritual, an artist paints beautiful designs with henna on the bride. This is done to attract good luck, and the endings of the feet and hands are painted as a healing remedy for the nerves.

On the other hand, the guests will not be able to wear a red dress, since it is the color that corresponds to the bride, and she combines it with ornate saris in golden tones.

This Swedish tradition may sound controversial, but it has the best of intentions. First, the groom is asked to leave the room so that all male guests, specifically singles, can kiss the bride on the cheek. Afterwards, the bride must leave and the single guests fill the groom with kisses. Traditionally, this custom is done to give luck to single men or women seeking marriage.

Although the concept may remind you of overheated parties or weekend weddings, each Moroccan wedding day has a meaning. On the first day, the bride enjoys a purifying bath with her friends and family. On the second day, he participates in a protection ritual, in which his body is filled with henna tattoos, in addition to traditional designs, passages from the Koran are often added.

The main ceremony takes place on the third day. The ritual begins with the arrival of the bride in a carriage carried by some of the couple’s trusted men. In the welcome, the guests eat dates and drink milk. If three days seem too long, consider that in some cases the party still lasts 5 days, and, in the past, it used to last 7 in an almost regulation way.

Poland: vodka, salt, and bread for the trousseau

Just as in Mexico it is common for couples to have godparents with earnest money, in Poland the couple’s parents give them vodka, salt, and bread. Before the wedding, the bride and groom should drink and eat some of these foods, which are full of meanings. The vodka serves to invoke good times and joy, the salt is a reminder that difficult times can come, and the bread represents the desire that they never lack food.

The wedding traditions consist in placing rotten milk, burned food, spoiled food, mud, and other unpleasant things on the bride to give her a particular congratulations on her wedding. Afterward, the bride must spend a whole night in a tree under the influence of alcohol. The act explains that, when the bride submits to tradition, it is because she will face any situation during the marriage. Like some kind of strength test.

Another famous Scottish tradition is to cover the groom up to the waist with paste and then toss him with flour or feathers. The groom parades through the streets and his friends make as much noise as possible for all to see. In some places, the bride goes through the same process. A boat away in Ireland, legend has it that the bride and groom must dance at their wedding … but always keeping at least one foot on the ground, to prevent evil fairies from getting in their way.

Germany: sweep up the broken dishes!

In Germany, during a pre-wedding party called Polterabend, guests give away pieces of china, and the bride and groom… smash them on the ground! Afterward, the couple must clean everything and pick up the broken pieces, as it is considered that they will give them luck in their marriage. This tradition also represents the challenges that the couple will face.

The tradition of broken crockery is reminiscent of a similar celebration in Greece, although in Greek weddings the ritual is performed after the wedding.

China: the crying of the bride

In some regions of China, it is traditional for brides to cry for an hour a day for a month before the wedding. After the first 10 days, the bride’s mother must begin to repeat the tradition herself, and 10 days after that, it is the grandmother’s turn. Tears are believed to clear the bride and groom’s path. In other regions, the bridesmaids put tests and obstacles on the groom during the morning of the celebration.

Czech Republic: and the children by when?

In the Czech Republic, before a wedding, a child is placed in the couple’s bed to bless their union and wish them fertility. Another wedding traditions in this country is for the couple to eat a bowl of soup with the same spoon, symbolizing their union and cooperation.

Japan: celebrating with a drink

In Japan, there is a tradition called San san kudo which means “three, three, nine”. The bride and groom must exchange glasses with sake and drink three times from three glasses of different sizes. Other members of the family also participate in this celebration, in which it is traditional for brides to wear white from head to toe, including makeup, a kimono, and a hood instead of a veil, which is made to ward off “jealousy from the mother-in-law ”… can you imagine?