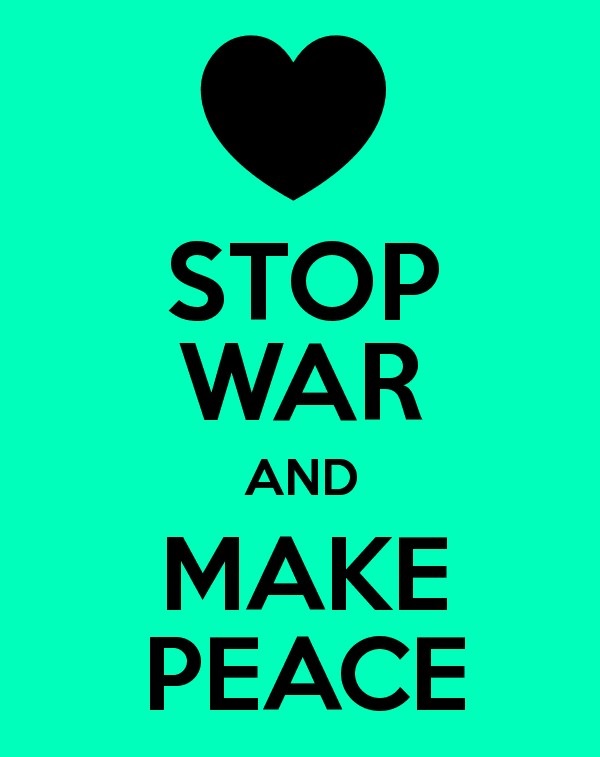 Posted at 09:38h in War and Peace by Nathan Peters 0 Comments
0 Likes

Achieving world peace sounds like an idyllic and perfect dream. There are so many conflicts and so much inequality in the world that considering this objective seems excessively naive. However, there has never been so much potential in the history of humanity to achieve it. We strongly believe that a better world is possible and that to achieve it, the government and the various social agents are necessary, although also the individual participation of each person, promoting and infecting positively with actions in the immediate environment. That is why we want to encourage you to perform this task routinely, starting by watering your own plant:

How to stop wars and make peace?

Some solidarity act can be carried out in different ways that can be daily gestures such as giving help, yielding the seat or passing, listening or having a detail with someone, avoiding a conflict, reporting disrespectful or unfair behaviors, spreading information of interest, supporting causes fair, donate blood, clothing, medicines, toys, … partner with organizations or participate in volunteers, use your creativity to show the value of solidarity in the physical or digital space.

Death must never find us indifferent

It doesn’t matter who the victim is, his nationality, religion, skin color, or the place of the event. Can’t we just cry ours? Victims. Each victim is our brother or sister. Let’s never get used to horror. Habit hides resignation. Habit and resignation to massacres, killings, death, violence take away our dignity and kill our humanity.

The problem we face is complex

Which doesn’t mean it’s unsolvable. But (faced with any complex problem), we must reject simplifications. There are many things to do to overcome terrorism and they involve us all, collectively and individually. They require time, patience, knowledge, determination, and constancy. An acceleration is needed in many fields, but we are fleeing the easy slogan and all those who point the finger and raise walls against others, Islam, Muslims, migrants, women and men fleeing war and terror…

The military component terrorism must be fought, stopped, neutralized with intelligence, police investigations, a collaboration between the security services, the fight against crime and drug and arms trafficking, prevention systems. We need unity, political will, sharing, cooperation and coordination of information, policies and adequate economic resources.

What does it mean?? We are at war! For this?? War?? Bombs and fighter-bombers, missiles and aircraft carriers are useless and unusable. Every time we use them we extend and radicalize the foundations of terrorism. Fifteen years of “war on terrorism” have produced disastrous results. We must stop throwing our money away to do wrong and inconclusive things. IS?? Time to definitely change direction.

Terrorism has many roots, but history tells us that ongoing wars are fueling it. This is why we are interested in working actively to stop them. Their continuation and proliferation not only lengthens the trail of horror and pain but fosters terrorism, forages it, extends it. Justifying a war on the pretext of fighting terrorism is pure hypocrisy. Stopping wars is a duty of all those responsible for international politics. IS?? The first step of those who have the duty and responsibility to build peace and security. To go to the root of the problem, it is also necessary to firmly counter the legal and illegal trafficking of weapons and their production.

To desert the war of words

We can all do it. Words kill. Before the bombs, the words of war sow terror, stir up hatred, destroy reason. IS?? Urgent to build a barrier to those who speculate on the fears and indignation of citizens, who want to replace goods with malice, who deepen the divisions, create new enemies and always erect new barriers. On television, on the web, on the radio and in print, anyone who sincerely wants peace must desert the war of words. The grammar of peace throws water on the fire of discord, extinguishes controversy, isolates the wicked, unites honest women and men in a common front.

Combating unemployment, eradicating poverty, fighting social exclusion and marginalization, reducing inequalities, promoting the recognition of diversity, intercultural and inter-religious dialogue, promoting integration, educating for global citizenship, solidarity and reception must be among the priorities of those who want to eradicate terrorism from our cities, from Europe and the whole world. Radicalism feeds on social, economic and moral malaise, ignorance and rampant exclusion phenomena. Social, cultural and educational policies are essential tools for an effective strategy to combat terrorism.

It is not a silly utopia. IS?? The most concrete, constructive and effective way to get out of the vicious circle of evil. Evil knows no limits or boundaries. The illusion of being able to defeat him with the same means feeds an escalation of endless violence, limits and boundaries. To the theory of infinite war, we must contrast the will to desert war or the will to stop the spiral of terror so as not to be crushed. With clear awareness, we must note that violence never solves problems but aggravates them.