Posted at 13:46h in Culture by Danielle 0 Comments
0 Likes

The Commonwealth of Australia is located on the continent of Oceania and is characterized by having a form of government mainly constitutional monarchy, accompanied by parliamentary federalism. It is one of the nations that share a historical past with Great Britain, due to the fact that it was previously occupied by a group of colonies from this country. It is a country with great biodiversity, famous and known for its striking and endemic fauna, made up of unique and large animals.

The Australian population is made up of diverse cultures, some descendants of prehistory, where it is estimated that there could have been settlers for 65 thousand years. There are also records of some visits by Spanish and Portuguese colonizers, then dominating the English, which is why there was an important mix of customs that have been established until today, despite the fact that it is a fairly modernized country. These customs are reflected in the Australian wedding traditions that we will learn about below. 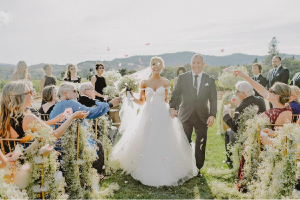 Australian laws establish that there is freedom of worship and religion and the country, for which there is no specific church that is in charge of weddings. However, the religion with the most practitioners is Catholicism. During these ceremonies, the marriage document is signed at the same time, which is normally done during a separate civil ceremony. This signature is made with a green pen or pencil, without the ink being green, to call for happiness and good luck for the couple getting married.

Another ritual is that of the vows, where the bride and groom dedicate words to each other, promising each other company and fidelity in the relationship. Finally, there is the 17-second kiss, which lasts that long since it is believed that each second represents a wish and a good omen for the couple in their married life, although it can also be related to fertility.

A striking feature of Australian weddings is that the bride and groom, when going to the church or the place of the ceremony, go together in a taxi, thus representing the independence and autonomy of the couple. On the other hand, these weddings are usually held outdoors, taking advantage of the beauty of Australian nature, commonly on the beaches or in the mountains of the country. At this point, the floral and natural decorations are present, also influencing the dress of the guests, with the typical and autochthonous touches of the beautiful Australian culture.

It is also important to highlight the bachelor parties, one for the bride and one for the groom, days before the ceremony. There is also the engagement ring from the groom to the bride to establish the marriage, which by tradition wears a diamond, although this may vary depending on the economic possibility. At the reception, the groom usually gives a speech thanking the guests for coming and narrating how he met the bride. Other customs are the throwing of the bride’s bouquet to the single woman and the groom’s garter belt to the single woman.

An indigenous custom of Australians regarding dress is that, unlike other countries that share the characteristics of Western culture, the bride and groom dress together with for the ceremony, rather than separately. However, it is customary for the bride to wear a white dress with details to her liking, accompanied by a veil that covers her face de Ella before the kiss of the ceremony, and a bouquet of flowers to match the decoration of the event. Accessories and shoes match the dress.

The groom, for his part, wears a suit that consists of a long-sleeved white button-down shirt under a black jacket. He wears pants the same color as the jacket and shoes. He can wear a bowtie or tie, depending on taste, and a small bouquet of flowers in his jacket pocket.

Australian cuisine for weddings consists mostly of meats and desserts, although fruits are also of great importance for these events. On the other hand, the beach expands the menus, offering delicious and highly customary foods for all Australians.

The most common meal at Australian weddings is barbecue, which is usually done outdoors and can be made up of various grilled or roasted meats. You can also find dishes with seafood, such as squid with salt and pepper, salmon with vegetables, and some oysters or scallops. As an exotic food, you can find kangaroo meat burgers, although this strictly depends on what the bride and groom want for their menu.

The main point in the sweet food of these events is, as is customary in many countries, the wedding cake, which is normally decorated in white. However, at Australian weddings, there are also other desserts, which are usually cupcakes or cookies, although you can also find brownies, lemon-filled pastries, sweet scones, and in some cases, ice cream. There is no specification regarding wedding sweets, it all depends on the liking of the bride and groom.

Australians are characterized by normally drinking beers and wines at these celebrations, as an accompaniment to meals. There are also non-alcoholic options, finding fruit smoothies and natural juices since the characteristics of the country allow their cultivation and production. However, in this country coffee is given a lot of importance, which is why, if it is to the liking of the bride and groom, it can be accessed at weddings.

You may also be interested in FOOD CULTURE, THE MOST AUSSIES DISHES OF AUSTRALIAN CUISINE